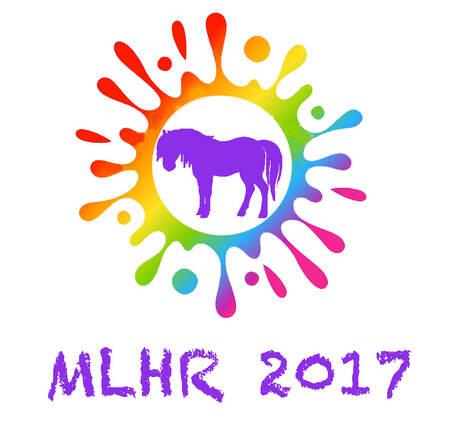 2017
MLHR Ball 2017
MLHR has held three fund-raising black tie balls, the first in 2017 in the Glenroyal hotel in Maynooth. It was a night for a lot of the volunteers to attend as well, to meet in circumstances where for once they weren’t all wearing wellingtons or covered in mud.

There was a sitdown dinner, raffle prizes, band and DJ entertainment and everyone danced the night away in true MLHR style. We love a good party!
Two more balls were held in 2018 and 2019 at the Westgrove hotel in Clane and the Radisson Blu in Dublin respectively. 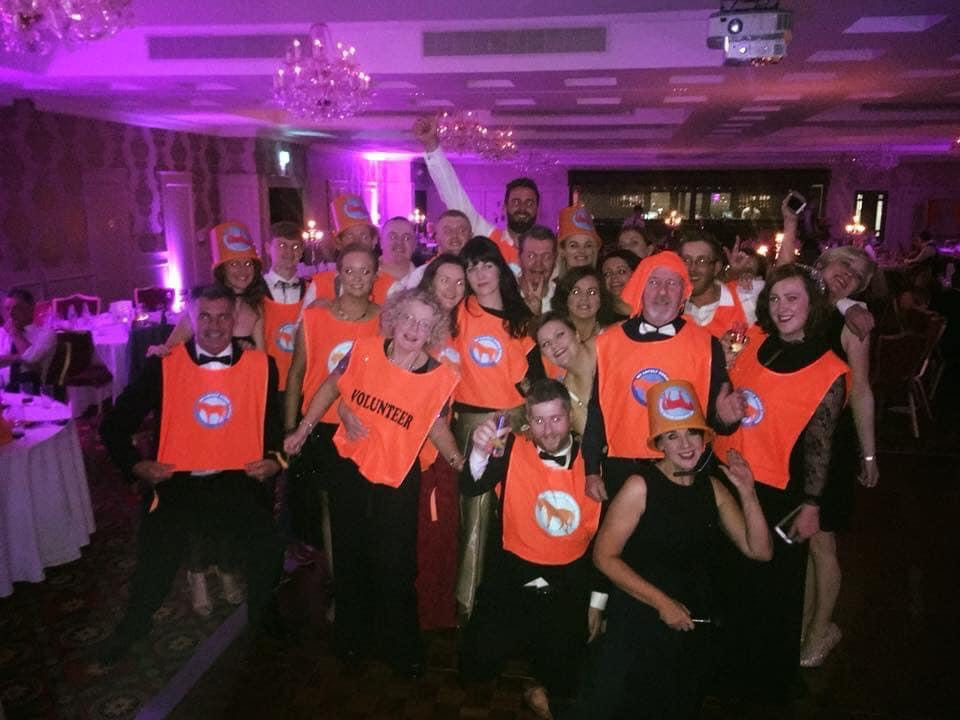 ‘MLHR volunteers have to fundraise continuously to support our rescue and rehabilitation work. Except for a small yearly grant from the Department of Agriculture everything else is funded by the kind donations of our supporters and the hard work of our volunteers and followers.’ Debs

The Dereen 7
In November of this year, an MLHR volunteer was given information that there were thoroughbred horses dumped in a forest near Dereen, Co Kildare. MLHR went to the area and found the horses and scanned them. All seven had Weatherby chips. This was no ordinary dumping.

The Department of Agriculture inspectors were contacted and while decisions were being made as to the horses’ future, MLHR brought them hay and water to keep them alive. They were in a very bad way. Eventually the owner surrendered them and MLHR rescued them from the forest under direction from the Department. One of the horses, Jennifer, was taken directly to one of our foster homes in Waterford, kindly transported for free for us by Kildare Horse Transport.

Two eventually went to another charity and the five that MLHR kept all survived after much love and care. We called them, Naomi, Grace, Giselle, Jennifer and Higgins. All have since been rehomed.

There was no prosecution as department officials could not ‘gather sufficient evidence to warrant a prosecution.’ This lack of prosecution for animal welfare is a constant source of frustration for MLHR and all those who care about justice for animals.
Eric and Ernie
two little adorable lambs were born on a farm but had the habit of visiting their neighbour and playing with her dogs. Little did they know how those games would ultimately save their lives.

One day the neighbour was driving along when she saw the farmer broken down by the side ofthe road. He had Eric and Ernie in his trailer and told her he was taking them to the factory as he needed the money.
She couldn’t bear to think of this happening so she bought the lambs and gave them to MLHR.
‘There is a misconception out there that sheep are stupid but they are quite intelligent with great memories and recognition skills. Eric and Ernie would see me coming out my front door and call over to me, not for food but for affection. In their 10 acre field they would recognise
who was at the gate and only come over if they knew you.’ Cathy

Eric and Ernie have since been adopted and are living out their full lives thanks to their childhood friendship with a neighbour’s dog and the kindness of a special lady.
UCD
MLHR teamed up with UCD large animal veterinary clinic in 2017. UCD use the main farm as their base for training equine students in the field. After all, where else would you find so many sick and injured horses in one place! Each week their amazing head vet Nikki comes to the farm with a different group of students who would not only learn how to handle equines but also get a great insight into the many injuries and illnesses that can befall them and then use them for their case studies.

In this year also UCD were able to do a very successful operation on one of our horses legs. Aine, a 14 year old shetland, had a broken leg which went untreated and then set itself at an angle. She was being chased by dogs and eventually MLHR got her owner to surrender her. ‘The operation took four hours and we put up a Go Fund me to help with costs. Our target was 3,000 euros which we reached and the kind wishes and donations from everyone really warmed our hearts.’ Cathy

Despite her age, Aine’s leg healed really well. We monitored her for a year and then she went off to one of our long term experienced fosterers with her best friend Shaft who had cushings disease. 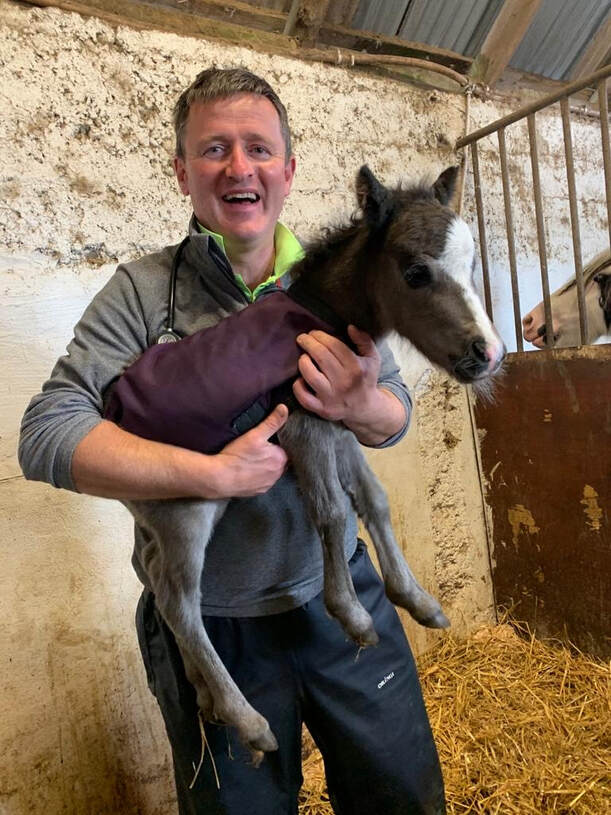 John Drumm, Blackwater vets
‘As we are talking about vets we must mention our very good friend and fantastic vet to all our animals, John Drumm of Blackwater vets. Time and time again he has rushed to our aid and his compassion for all our animals and his understanding of what MLHR are trying to do is so appreciated.’ Cathy

That Summer Cathy built her arena and her wintering shed, both fantastic assets to her farm. ‘The arena is of course for training our horses, doing groundwork with them and is also a good place in winter for turnout. It's great for exercising and rehabilitating any horses with tendon
damage.’ Cathy

The wintering shed was designed by Cathy herself. Most of her animals can’t winter outside on the fields unlike many of the hardier cobs and horses up at the main farm. The barn was designed with a sociable perspective in mind. It's an open barn with individual turnouts for each of the horses. Injured horses still need a certain amount of movement to prevent atrophy which can exacerbate their problems. There are five large enclosures with the option of four additional ones each with its own paddock.
BACK TO
​MLHR THROUGH
THE YEARS