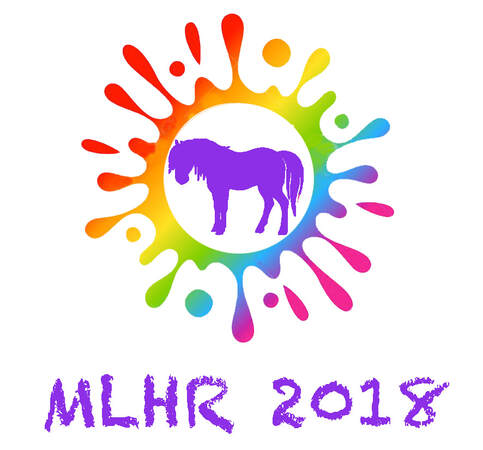 2018
MLHR and the Rebels/ in the rebel county!
February 2018, just before the snow fell, MLHR were called to help the Department of Agriculture and the horse pound in the rescue of 11 thoroughbreds who were starving to death in a barn in Co Cork. The conditions they were found in were shocking.

We ended up taking the 5 weakest horses and amongst them was a gentle, pretty mare, very shutdown and close to death. She made a wonderful recovery and on checking her chip we discovered that she was in fact War Celeste, her father being War Front the most expensive
sire in North America. She herself had only been sold a couple of years previously for £240,000.

Celeste is both testament to the unbelievable spirit and resilience of horses and the mini miracles that love and care can achieve. She is also a sad testament to what happens to horses at all levels of society when they are overbred and subsequently unwanted.
Extreme weather
2018 would be a year of extremes, heavy snow in early Spring followed by a scorching hot summer The snow started on February 22nd and it was a catastrophe for so many animals in this country. Many horses were left without food or water, knee deep in snow, often with little shelter. Horses, especially those who are thin or have a short coat will fare worse than heavier horses with longer coats. Horses need to feed regularly to fuel and keep their bodies warm.

All throughout the snow MLHR volunteers did hay drops all over the city to all the areas they knew that horses would be left to fend for themselves. It was heartbreaking to see these beautiful creatures abandoned to the elements by their so called owners who cared nothing for whether they survived or not. MLHR cared and everyday went out to feed horses.

Cars got stuck in the snow at times and the jeep almost gave up the ghost from the pressure of hauling horse boxes of hay from the farm upto the city. But it had to be done. A few volunteers dug in at the farm and stayed to look after the animals until the worst of the weather was over.

During the snow MLHR rescued Sara and Ellen, two young cobs in County Kildare. They were on boggy land in an area notorious for horse welfare problems. Our volunteers had checked on them just before the snow but they were half wild and would be difficult to catch. Then the snow hit. All the other horses from the same field had been moved out by the owners but Sara, Ellen and another horse were left behind, most likely because they couldn’t be caught or they weren’t really wanted.

A plan was hatched by MLHR to save them. A call went out on Facebook for people to come and help and on a cold, snowy morning lots of kind locals showed up. The third horse was found dead in the snow but Sara and Ellen were still alive.

Everyone stretched out in a long line, herding the horses towards the gate. It was hard work in the snow and the horses were frightened. It took hours but in the end Sara and Ellen were finally caught and walked onto the horsebox and into their new life. They have taken a long time to become used to humans and they have clung to each other throughout everything.
Through this rescue we also met another courageous spirit who we teamed up with to open MLHR Cork that same year. Kelly, a strong advocate all her life for horse welfare, was already rescuing horses in distress in Cork.

In October of 2017 she’d come to the notice of Jeannette, a local farmer/landowner who simply one day drove up to the Valley Fields where Kelly kept her handful of rescues and said ‘I know what you’re doing and I want to help you.’

These two amazing women have run MLHR Cork since 2018 from Jeannette’s farm. The first rescue horses to join Jeanette’s two resident donkeys were Jingo and Jolie.

Since then over 106 horses have passed through MLHR Cork, including three foals born on the farm. It’s a small but totally dedicated team of volunteers who run this amazing place.

Bonnie joined by putting a handwritten note in Kelly’s letterbox (she lived on the same street as her ). It said ‘get in touch, hoping to help you.’ It was a good thing too that she did because she and her family have been indispensable to MLHR. Her partner Will was soon on board and it was he who managed to fashion stables out of empty outdoor sheds and is the resident handyman and all round go to man when something needs repairing or designing. Her son Luke, Kelly’s daughter Lauren and Jennette’s daughter Jana are all now part of this small, hard-working team. MLHR Cork rescue from the pound, go to callouts at all times of the day and night and are a beacon of hope for the many abused and neglected horses and donkeys in
the south of Ireland.
There will always be a little bit of wild in their hearts but they know now that they are safe forever. That harsh winter was followed by one of the hottest and driest summers on record. This time so many horses were left dying of thirst. Every day over that Summer, volunteers brought hundreds of litres of water by hand to horses all over Dublin, often carrying them long distances through fields and wasteland areas to reach the horses.

That was the Summer too when we found so many baby foals abandoned across the city because they were either the wrong gender or colour to suit their owners tastes.

Ciaran and Zade
One of the most poignant rescues of 2018 was that of Ciaran and Zade, a one year old and a baby, both weak and abandoned and clinging to each other for comfort. Ciaran has grown into a strong young horse who is still with us on the farm. Our little Zade didn’t make it. He fought
so hard for weeks but his heart eventually gave up. He had made a best buddy in another baby called Reece, also rescued that Summer.

They had gone to foster together on the farm of two of our experienced volunteers, Leona and Kirsty to be given the individual care and nurturing
they needed but Zade had already suffered too much and he just couldn’t fight anymore. This is Reece today strong and beautiful. Zade will always be in our hearts.
In between the extreme weather events we had an extreme event of our own - one of ourhorses was stolen from the farm. One night in April as all the horses were coming in from the fields the volunteers noticed that Polly Pockets, one of our smallies, wasn't with them. They spent hours searching for her in fear that she’d had an accident. At 2am they called off the search and went back out again in the morning. Neighbors were contacted and their fields searched in case she’d managed to get out herself but there was no sign.

Someone must have taken her. A massive facebook appeal was launched for everyone to keep an eye out for her and in the hopes that Polly would become too hot for her captors to handle and they’d just abandon her.
Two and a half weeks later, a lady called Olivia was out walking her dog in Co Offaly when she came upon Polly in a wooded area. Polly started following her home. Within hours we were contacted and we got our sweet Polly Pockets back again. The thieves had painted her hooves
black and plucked the white hairs out of the star on her little forehead hoping to disguise her.

Polly changed after her experience, she became agitated and couldn’t seem to fit back into farm life. Now she lives with Tarah, one of our longtime volunteers. She went there with her best friend Gordie and is much happier now - and very, very spoilt.
Hay Appeal
Because of the extremely dry Summer, there was a huge shortage of grass all over the country for horses and all animals to graze on. Instead everyone had to feed their animals hay and haylage and it was feared that there would be a shortage of hay the following Winter because of this. Hay prices soared, bales often costing double what they normally would. With the huge amount of animals we have to feed we launched our Hay Appeal to try and cover the extra costs which were substantial.
Our patron Neil Hannon kindly fronted the Appeal for us and our supporters responded with their usual kindness. We also sold two VIP tickets which entitled the bearers to afternoon tea on the farm served by our very own ‘Mrs Doyle’ followed by a singing session with Neil and a trip round the farm to meet all the animals. Both days went off splendidly and we are so grateful for the generosity of all who supported.
In May of this year we got 7 goats, 10 pigs and 2 equines all from one big rescue mission.The pigs went to Cathys and the goats and equines to the main farm, everyone eventually settling in well with the existing residents. For a while the goats hung around in two seperate groups but now they’re just one big happy herd. This was the most animals we’d ever taken at once and a lot of work went into getting ready for them and helping them settle in. They had come from a terrible situation and we are so happy to have been able to offer them a loving and happy home.
Cat rescues
2018 also saw the beginning of our cat rescues.
Our first rescue was Logan, found in May by one of our longtime volunteers Ted on the side of a dual carriageway. He was only 8 weeks old. He went straight to foster with Fiona and her husband Anthony, two of our most loyal volunteers and also, in this case, failed fosterers! Logan still lives with them and has even learned to use the toilet.

Since then Fiona has fostered 42 cats for MLHR, including the adorable Drew and Marley who were the first orphaned kittens that we rescued after their mom was knocked down and killed.
They eventually found a home together with a lovely family in Portarlington.
BACK TO
​MLHR THROUGH
THE YEARS