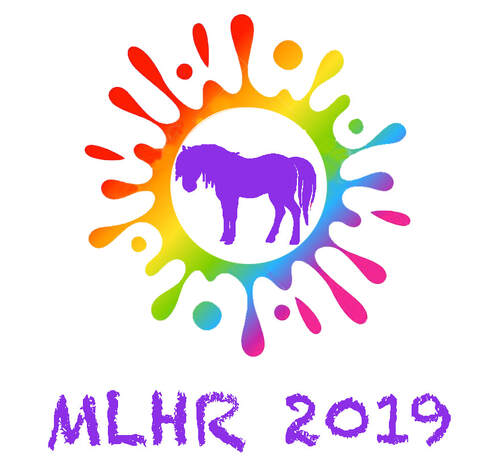 2019
2019 was a watershed year for the MLHR farm. Due to the enormously kind legacy of a lady called Olive, we were able to finally concrete the yard and create large dry standing areas for the horses. Attempts had been made before to even out the yard and get rid of our constant companion the mud, but without a big cash injection it had never been enough.

Now, in every direction, down onto the fields the yard lay even and dry. Wheelbarrows rolled as they were meant to do, no-one would ever fear losing a boot again and the horses could walk in comfort from hay to water drinker and amble along with their friends. We got a poo scraper to attach to Peter and gone were the days when every inch of the yard had to be scraped by hand.

To top this off we invested in our shelter domes, four in total arrived in March. They protect our horses from the elements and look beautiful on
the skyline.
Mikey - a small little fellow with a very big personality.
Mikey was found tied at the side of the road with horrific injuries but he defied all the odds and won countless hearts on his road to recovery. We’d never had the reaction to another horse as we did for Mikey. People took him to their hearts and so badly wanted him to be okay again. It was wonderful to know that there were people out there who cared as much as we did and cried tears with us over him. In the end their wish came true. Mikey made a full recovery and on Feb 1st 2020 went off to his forever home with his bestie Clarence.
Trudy
Not all stories can end like Mikeys, some are just horror from the very beginning to the very end. Trudy’s story was like this and we include her here because we never want her to be forgotten. We haven’t put her pictures here, they're on our facebook for anyone who wants to see them. They are not for the faint-hearted.

Here we’ve put her words which should be read and shared always because they must not be forgotten until the last suffering horse has breathed their final breath and all the rest are safe and loved.
We had two big gigs this year, Marley Park Animal Love Fest on August 17th and our biggest EP ever. Trojan work went into organising both events but they were an amazing success. MLHR sure know how to throw a party.
At the Soutside People’s awards our very own Kenny sisters were nominated for and won ‘Volunteer of the year award.’ With not a welly or speck of mud in sight they accepted their award from Joe Duffy and in their acceptance speech paid tribute to all the MLHR volunteers who make everything possible. Well deserved!
2019 was a year for finding babies and then losing them again. The biggest killer of under one year olds this year was worms. It’s such an easy and cheap thing to worm your horse correctly but most of the horses we see are never wormed and in babies especially this can mean death.
These beautiful little creatures came to us already riddled with worms and try as hard as we could, there was just no saving them. It was a very difficult time for volunteers and the losses of these babies will never be forgotten.

In May of this year we got 7 goats, 10 pigs and 2 equines all from one big rescue mission.The pigs went to Cathys and the goats and equines to the main farm, everyone eventually settling in well with the existing residents. For a while the goats hung around in two seperate groups but now they’re just one big happy herd. This was the most animals we’d ever taken at once and a lot of work went into getting ready for them and helping them settle in. They had come from a terrible situation and we are so happy to have been able to offer them a loving and happy home.
Christmas 2019 was marked on the farm by a very special tree, the MLHR memory tree. ‘When we lose animals on the farm it’s heart-breaking and we totally understand the pain many people feel when they have to let go of their furry friends. So we came up with the idea of a memory tree where we could hang the names of those we’ve lost but will never forget’ Martina

The MLHR memory tree was a huge success and people loved the daily photos posted of all the new names on the tree so they could search for their own beloved pets. The tree itself was a beautiful feature in the main yard and each night it twinkled brightly and reminded everyone
of just how much animals mean to us and how much love they bring to our lives. The memory tree will be set up each Christmas now to honour all our four legged friends.
BACK TO
​MLHR THROUGH
THE YEARS